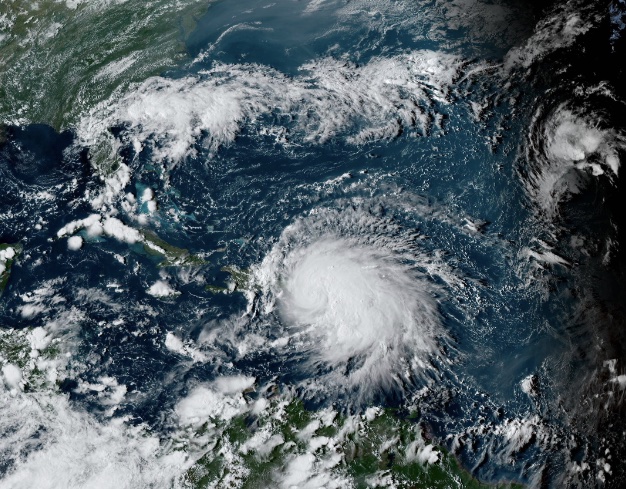 Late Sunday morning, the sixth named storm of the 2022 Atlantic Hurricane Season, strengthened to become the season’s third hurricane.  Hurricane Fiona was christened as such as it slowly moved to the West-Northwest just to the south of Puerto Rico.  Although the biggest concern currently is with the torrential rains and flooding in the mountainous regions of Puerto Rico and Hispaniola, the growing interest in the Mid-Atlantic is where the storm will go after it moves through the Greater Antilles.

Since Fiona’s emergence in the middle of this past week, there have been many different model scenarios.  One scenario early on depicted Fiona to continue chugging along through the Greater Antilles, getting into the Florida Straits and eventually the Gulf of Mexico, and rapidly intensifying into a monster hurricane making landfall along the Central Gulf coast much like Katrina did in August 2005.  Others indicated the storm may ride up the Eastern Seaboard, and crash ashore in Long Island and New England.

More recently though, the models have suggested that Fiona will likely stay off the East Coast of the United States, and perhaps impact the Canadian Maritimes.  A powerful storm system is expected to develop and move through the Northeast and Mid-Atlantic by the middle to end of this coming week, and help push Fiona out to sea.  However, this scenario isn’t definite yet since there are still some unknowns about what will happen to Fiona in the near term, and how and when the other storm system will develop.

Tropical Storms and Hurricanes are fickle and fragile systems believe it or not.  While they can have amazing power and fury at their optimum, these storms need to have certain things be just right for them.  One is water temperature.  Another is light upper level winds.  Tropical storms and hurricanes also need plenty of moisture in the air around them.  For example, one of the things that prevented Hurricane Irene from being a truly devastating storm for the Mid-Atlantic and Northeast in late August 2011 was the intrusion of dry air into the system as it moved up the East Coast.

In addition to the development factors, there is also the impact of other weather systems around these storms.  Tropical Storms and Hurricanes have always been known to be very unpredictable.  A classic example was Hurricane Elena in the Gulf of Mexico back in the late summer of 1985.   Elena meandered in the Gulf of Mexico for several days before making landfall near Biloxi Mississippi.  The reason for Elena’s haphazard motion was due to the breakdown of steering mechanisms in the area.  Forecasters and residents alike didn’t know what the storm would do next.

Another important ingredient with where these storms will go is how strong they will get.  There has been a lot of discussion about the strength of Fiona as it moves through the Caribbean.  The weaker the storm was, the further west it was expected to go.  On the contrary, the stronger the storm, the more likely it would begin to turn northward.  As mentioned earlier, one model suggested Fiona was going to continue westward, and eventually head into the Gulf of Mexico.  The model projected that Fiona was going to have a more difficult time getting stronger and becoming a hurricane due to the mountainous terrain in Puerto Rico, Hispaniola, and Cuba.

The rugged topography of those islands are notorious for tearing tropical systems apart.  When that happens, tropical storms and hurricanes become disorganized, and less likely to be influenced by the steering mechanisms such as a ridge or trough that nudge the more powerful storms along.  Despite its close proximity to land, and the rugged mountains of Puerto Rico, Fiona has managed to not only become a hurricane, but continue to strengthen with its winds increasing to 85 miles per hour, and its minimum central pressure falling to 29.12 inches of Hg, or 986 millibars.

Residents along the East Coast from Cape Hatteras northward into New England need to closely monitor the future progress of this storm.  In the least, Fiona will stir up the Western Atlantic and Gulf Stream enough to where it could create heavy surf, swells, and rip currents along the coast.  It has also been suggested that Fiona follow a path not too far offshore like Hurricane Earl in 2010.  So if you plan to go to the beaches this week, be prepared for some sort of wave action along the East Coast of the United States as the week progresses.