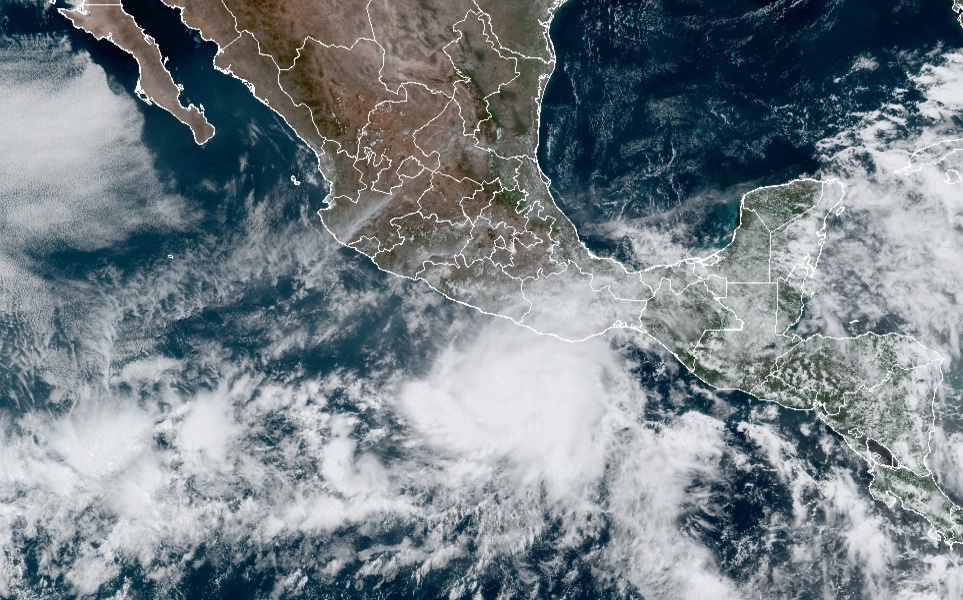 As of the latest advisory from the National Hurricane Center (10 AM CDT, or 11 AM EDT), Agatha was centered some 200 miles to the West-Southwest of Puerto Angel, Mexico.  The rapidly strengthening storm now has winds of 75 knots or 85 miles per hour.  Minimum central pressure is  28.97 inches of Hg, or 981 millibars.  Agatha is moving very slowly to the North-Northwest at 2 miles per hour.

Satellite imagery over the last 6 to 12 hours has begun to detect a low to mid-level eye.  Wind gusts are currently up to 90 knots or 105 miles per hour.  The of slow movement of the storm over very warm water (near 30 degrees Celsius or 86 degrees Fahrenheit) has triggered rapid development.  In addition, there is very little in the way of wind shear at the upper levels to hinder growth.

The storm may undergo a eyewall replacement cycle prior to landfall.  Such a cycle could help curtail its rapid development before coming ashore.   The NHC’s latest discussion indicates Agatha will strengthen into a near major hurricane with 110 mph winds before landfall.  Keep in mind that there isn’t much difference in power between a strong Category Two storm (110 mph) and a low end major hurricane (115 mph).

The NHC’s key concerns with Agatha include:  1) Dangerous coastal flooding from storm surge and destructive waves in the warned area.  2) Powerful and life threatening hurricane force winds in the warned area.  And, 3.) Torrential rains in Southern Mexico.  The latest NHC advisory suggests 10 to 16 inches of rain for the Mexican state of Oaxaca.  Isolated areas in that region could see as much as 20 inches.

The copious amount of moisture coupled with Agatha’s slow motion will result in dangerous flash floods and mudslides.  Other areas that could see tremendous rainfall include the Mexican state of Chiapas, Guerrero, Veracruz, and Tabasco.  In Chiapas, rainfall amounts could range from 5 to 10 inches with some areas receiving as much as 15 inches.

Meanwhile, in Guerrero, rainfall amounts could be between 2 and 6 inches with isolated areas seeing 10 inches.  Veracruz and Tabasco could see anywhere between 2 and 4 inches with amounts as high as 6 inches.   The current guidance suggests that Agatha will become a depression over Southern Mexico within 60 hours.  Nevertheless, residents along the Gulf need to monitor the progress of Agatha’s remains.

Remnants of Agatha Could Re-Emerge in Gulf

The NHC discussion depicts Agatha dissipating within 72 hours. However, its remnants could re-emerge in the Gulf later this week.  The HWRF indicates that the moisture associated with Agatha’s remnants re-emerge into the Bay of Campeche early Wednesday.  The model furthers suggests the storm will make a second landfall near Tampico, Mexico early Thursday morning.

If Agatha’s follows its projected path and re-emerges in the Bay of Campeche it will be an Atlantic system.  Therefore, the National Hurricane Center will name it Alex, the first named storm of the 2022 Atlantic season.  The Atlantic Hurricane Season officially begins on June 1st.  Meanwhile, the Eastern Pacific season begins on May 15th.  Both seasons end on November 30th.

Last year, the Eastern Pacific had 19 named storms, 8 hurricanes, and 2 major hurricanes.  Both major storms:  Felicia and Linda were Category Four Hurricanes on the Saffir-Simpson Scale.  Felicia was the strongest EPAC storm of the 2021 season.  At peak intensity, Felicia had maximum sustained winds of 145 mph and a minimum central pressure of 27.91 inches of Hg, or 945 millibars.