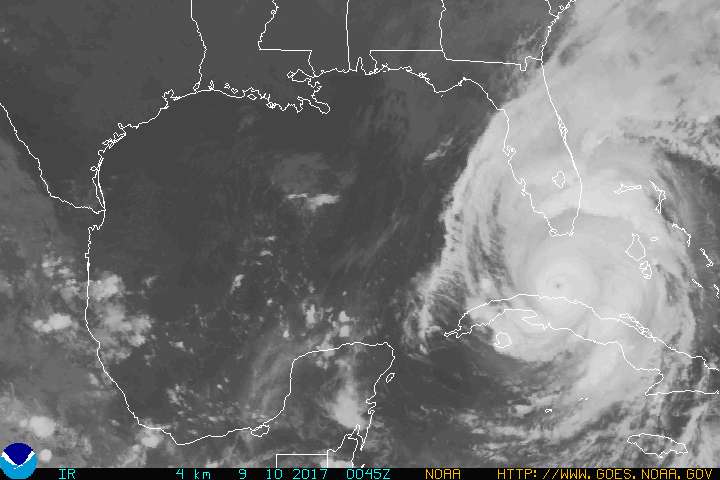 Infrared satellite imagery depicts Hurricane Irma, which is still a powerful and large Category Three storm as it moves away from the Northern Coast of Cuba and towards the Florida Keys and Southwest Florida on Saturday evening. Photo courtesy of NOAA.

If Hurricane Irma doesn’t reinvigorate itself over the warm waters of the Florida Straits and Eastern Gulf of Mexico before making landfall by daybreak on Sunday morning, some thanks for that could be due to the rugged terrain of both Hispaniola and Cuba.

Once again the orographic lifting of the tremendous tropical air and moisture from a powerful hurricane over these Caribbean mountains took some starch out. However, Irma remains a powerful Category Three Hurricane, and that speaks a lot to the tremendous structure and resilience of this monster system.

Most importantly though, Irma is back out over water, and very warm water. And, we all know that hurricanes love very warm water, like the bath water of the Gulf of Mexico and Florida Straits, especially this year. With its core still intact, and working with favorable atmospheric conditions, Irma could make a quick turnaround and re-intensify before making landfall.

Keep in mind this thing though. If you recall, Hurricane Katrina in August 2005, the monster storm did wind down some before coming ashore in Buras, Louisiana, and then near the Louisiana and Mississippi border on August 29th. The day before, Katrina was in the Gulf as a powerful Category Five Hurricane with 180 mile per hour winds. By landfall, those winds had decreased to only 125 miles per hour.

Despite the weakening though, Katrina still managed to bring ashore a record breaking 28 foot storm surge, the highest ever recorded in North America. It surpassed that of Hurricane Camille in 1969. Much of the reason for that was because Katrina had grown tremendously in size much like Irma has. There are quite a few similarities between these two storms in terms of size and power.

One key difference though was that Irma’s weakening was due to interaction with a rugged land barrier in the mountains of Hispaniola and Cuba. For Katrina, that was not the case. Nevertheless, it is very important to emphasize that just because Irma has weakened considerably over the past couple days, by no means, is this storm not capable of producing catastrophic damage.

The fact that Irma is a very vast storm like Katrina, Rita, Irene, Sandy, and others in recent years, and that it still has a solid core that could re-energize itself in short order. As of the 8:00 PM EDT advisory, Hurricane Irma is located some 45 miles East-Northeast of Varadero, Cuba, or in other words, about 110 miles to the Southeast of Key West in the Florida Keys.

The storm is moving slowly to the West-Northwest at 7 miles per hour. Winds have decreased to 125 miles per hour, which still makes it a major hurricane of Category Three strength on the Saffir-Simpson Scale. Wind gusts are still high at 155 miles per hour. Barometric pressure is still quite low at 932 millibars, or 27.52 inches. The big change is the size of the storm.

Before reaching the Northern Leeward Islands, Irma was about the size of Hurricane Harvey just before it made landfall in Rockport, Texas. Now, the storm is much larger. Hurricane force winds extend some 70 miles from the eye while tropical storm force winds reach out about 195 miles. So, for those in Miami and Fort Lauderdale, who believe they are out of danger because they are no longer in the cone of uncertainty, they need to think again.

The storm will cover all of Florida with strong tropical storm force to hurricane force winds. Also, keep in mind that the area to the east of the eye, particularly the notorious northeastern quadrant, or right front quadrant, is where the brunt of a hurricane’s power is. Let’s return to our Katrina example again. Remember, the storm first made landfall in Buras, Louisiana on the southeastern coast, and then a second landfall along the Louisiana-Mississippi border.

Katrina’s track into those areas put the Gulf coast of Mississippi in the dangerous eastern semicircle of the storm, which resulted in the historic, devastating, and deadly storm surge. True, New Orleans was hit hard, but that was due to a man made disaster, i.e., the levee system there failed. Had the storm made landfall to the west of New Orleans, things would have been much, much worse with even more deaths than the 1,800 or so that resulted.

Now, why is Irma still a very dangerous threat even though it has weakened quite significantly by losing over a third of its peak wind speed over the past couple days? Well, due to the concept of the conservation of momentum, particularly angular momentum since we are dealing with the spin of the storm as well. When Irma was a smaller storm it had higher wind speed, but now that the wind speed has gone down, the size and wind field has increased to compensate in order to conserve angular momentum.

If you are wondering what I mean by angular momentum, just think of a figure skater going through his or her routine, and they suddenly begin to spin in the middle of the ice rink. As he or she pulls his or her arms inward, he or she spins faster. When the arms go outward he or she will slow down. Think of the eye of Hurricane Irma to be like that skater. A tighter eye and smaller storm with high winds will expand as those winds decrease.

Reading the most recent forecast discussion from the National Hurricane Center in Miami, Florida at 5:00 PM on Saturday afternoon, Irma is projected to return to Category Four strength within 12 hours, and have 140 mile per hour winds before coming ashore along the West Coast of Florida. Like I mentioned earlier, the storm still has a solid core, and is again moving out into very warm waters in the Florida Straits and extreme Southeastern Gulf of Mexico. Re-strengthening is quite possible.

Looking at the latest forecast track from the NHC, Irma is expected to turn northward, and move over the middle Florida Keys by morning. Then, the storm will hug the West Florida coast during the day on Sunday, and be near Naples and Fort Myers by mid-afternoon, and then be in the area of Tampa, Florida by early Monday morning. Irma will then move inland over Northern Florida, and still be a hurricane in Southern Georgia by mid-Monday afternoon.

Irma is then expected to continue heading to the Northwest into Alabama, Tennessee, and toward Kentucky, Missouri, and Arkansas by mid-Tuesday afternoon. The reasoning behind this track is due to the fact that the storm is now on the periphery of the subtropical ridge in the Atlantic that has been driving it generally to the west. Now, it is beginning to fall under the influence of another high over Eastern Texas and the Western Gulf, which is serving as a buffer for the Lone Star State.

There is another ridge to the north of Irma that will lift out, and create the opening that is the consensus forecast track from the NHC. Looking at the model runs courtesy of Tropical Tidbits, the European or ECMWF model has Irma in the area of Key West as a 948 millibar low by 8:00 AM EDT on Sunday morning. The storm will continue to track north, and be north of Tampa by 8:00 AM EDT on Monday morning. Three days out, Irma is well inland over Northeastern Alabama as a tropical depression.

Moving on to the GFS, or American model, it has Irma in the Florida Keys as a 911 millibar low by 8:00 AM EDT Sunday morning. The hurricane will then move over the area around Tampa, Florida as a 947 mb low by 2:00 AM EDT on Monday morning, and over Northern Florida as a 959 mb low by 8:00 AM on September 11th. Irma then continues to head northwest and further inland and weakens to a depression by 2:00 PM EDT on Tuesday afternoon.

The CMC, or Canadian model has Irma in the area of Key West as a 980 millibar low by 8:00 AM EDT Sunday morning. Within 36 hours, or by 8:00 PM EDT Sunday evening, Irma is a 977 millibar low between Port Charlotte and Tampa. The storm then comes ashore over Tampa into Central Florida as a 979 millibar low by 2:00 AM EDT Monday morning. The hurricane then moves further inland over Northern Florida and Southern Georgia, and then moves to the northwest into Northern Alabama and Southern Tennessee by the end of 72 hours.

The Warning area also includes the Florida Keys, Lake Okeechobee, Florida Bay, and the Cuban provinces of Camaguey, Ciego de Avila, Sancti Spiritus, Villa Clara, Matanzas, and Havana as well as areas in the Bahamas including Andros Island, Bimini, and Grand Bahama. A Hurricane Watch is in effect for north of Fernandina Beach to Edisto Beach. A Tropical Storm Warning is in effect for West of Indian Pass to the Okaloosa/Walton County Line. North of Fernandina Beach to South Santee River.

Before I forget, I would like to make note about a couple places in the warned area; Tampa Bay and Lake Okeechobee. These two areas are very vulnerable areas to hurricanes and have not been directly impacted by a storm in a while. Tampa, in particular, suffered its last direct hit from a major hurricane in 1921. Back then, Tampa’s population was only 10,000 people. Today, the area is home to approximately 3 million people according to the NHC from an article by CBS News late Saturday afternoon.

Meanwhile, Lake Okeechobee is home to one of the deadliest hurricanes ever. The area was affected by a major hurricane in 1928. The storm, which is known as either the Lake Okeechobee Hurricane, or the San Felipe Segundo Hurricane produced winds as high as 160 miles per hour at one time, and a minimum central pressure of 929 millibars. The storm caused $100 million dollars in damage in 1928 dollars, which as of 2003 was about $20 billion in damage. The hurricane also killed over 4,100 people from the Caribbean to Florida.

This is a very serious situation. Some 6.4 million people, or about 25 percent of Florida’s residents live in the Sunshine State’s evacuation zones. As of a few hours ago, only 70,000 people were in shelters, and there were still some people on the streets in places like Miami Beach, especially since the forecast track has shifted west. This is very important, the storm may have shifted west, but again, it is a very large and vast system that has the ability to spread hurricane and tropical storm force winds over a large area. Time is running out to stay out of harm’s way.