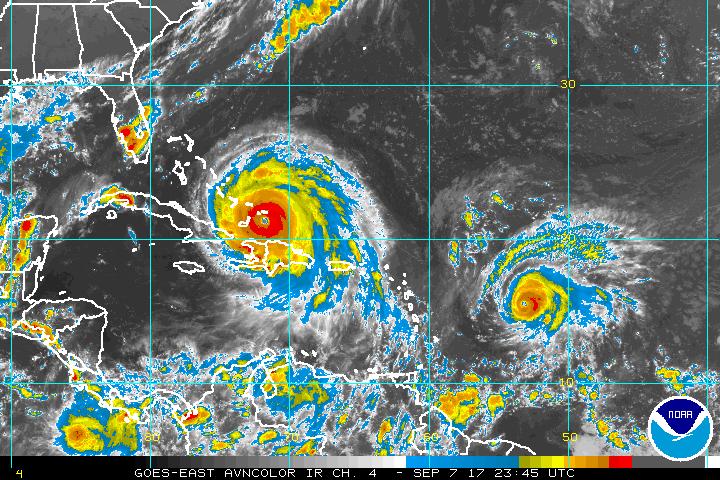 Infrared satellite imagery depicts Hurricane Irma, which is still a monster Category Five storm as it stays north of the island of Hispaniola on Thursday evening. Photo courtesy of NOAA.

Things continue to heat up in the Atlantic Tropics on this late Thursday afternoon and evening. We now have three hurricanes in the basin for the first time since 2010. Two of those storms are major hurricanes, and the biggest threat of them all is Hurricane Irma, a Category Five storm that is setting all kinds of marks.

The monster storm devastated the islands of the Northeastern Caribbean including Barbuda, which at first was reported to be 90 percent devastated, but then later on Wednesday night, the Prime Minister of Anguilla and Barbuda reported that the resort island in the Northern Leewards was, “rubble” as per CNN.

Nearby on St. Thomas, there was dramatic footage of Hurricane Irma’s powerful winds that was featured on the Greg’s Weather Center and Hurricaneville Facebook page on Wednesday afternoon. In St. Maarten, the historic airport is completely devastated. Over in Puerto Rico, the United States territory that has been dealing with a great deal of economic struggle, the residents there dodged a bullet as the storm stayed to the north and pulled away from the island, but still dealt with gusty winds and flooding rains.

As of this afternoon, CNN reported that 10 people were dead from the storm’s destructive path through the Northeastern Caribbean. Irma was able to maintain its very powerful intensity of 185 mile per hour winds for a record 37 hours. No other hurricane, typhoon, or cyclone on earth has ever maintained that level of ferocity for that long. It is also now third past Hurricane Ivan from the crazy 2004 Atlantic Hurricane Season in terms of duration as a Category Five Hurricane.

To understand what Hurricane Irma has done in terms of maintaining its fury, you have to look at how tough it is to maintain a level of such intensity that is Category Five. Hurricanes are vertically stacked systems since they are barotropic by nature. In other words, the clouds build vertically over the center of low pressure from near sea level to near the stratosphere. Baroclinic storms such as the nor’easters and extratropical systems we normally deal with in New Jersey, and much of the United States, have a slanted cloud structure since it is influenced by wind shear.

As a result, a hurricane, particularly a Category Five Hurricane is a very fragile structure, almost like a house of cards. A thing of beauty as long as it can stand. Once some air blows on it, it is gone. Vertical wind shear is a very hostile atmospheric foe that tears tropical storms and hurricanes apart by blowing off the high cloud tops from the powerful thunderstorms that develop, and are fueled by the warm water. Cat 5 storms follow the Goldilocks principle as Hugh Willoughby, a former long time NOAA hurricane researcher, said, “Everything needs to be just right.”

Category Five Hurricanes at most usually last 30 hours. A storm of that power to usually last that long are quite unusual. Hurricanes Isabel (2003) and Ivan (2004) managed to maintain that level of power for such a duration. Typhoon Haiyan, also known as Super Typhoon Yolanda, the most powerful tropical cyclone ever recorded that devastated portions of the Philippines, did not last at its peak intensity as long as Irma has. Hurricane Allen, the strongest storm ever in the same region that Irma has affected with 190 mile per hour winds, couldn’t stay that strong as long. Irma maintains its 185 mile per hour winds for 37 hours.

Irma has weakened since that time. Thanks to some interaction with the rugged terrain of the northern portion of the island of Hispaniola, which produced some orographic lifting of the abundant tropical moisture laden air, the maximum sustained winds have decreased to just 175 miles per hour with gusts down to 215 miles per hour while its pressure has risen some 8 millibars to 922 millibars, or approximately 27.23 inches of Hg (Mercury). The eye of the storm is decreased a bit to 20 nautical miles while its hurricane force winds extend some 70 miles from the eye and its tropical storm force winds reach out some 185 miles.

Simply put, Hurricane Irma is a beast. It is a very large system, which means even if it weakens, there is still a great threat, especially in terms of its storm surge. Let’s take a stroll down memory lane to August 28, 2005. Hurricane Katrina was lurking in the Gulf of Mexico as a Category Five Hurricane with 180 mile per hour winds. Katrina was on a course for New Orleans and the Mississippi Gulf Coast. Right before landfall though, Katrina weakens a good deal to be just a strong Category Three Hurricane with 125 mile per hour winds.

However, Katrina was still a vicious storm since it had been stirring up the waves in the Gulf for several days. Most importantly though, Katrina, like Irma was very vast, which made it very capable of producing a massive storm surge. Along the Gulf Coast of Mississippi, Katrina did with the biggest storm surge on record in North America at 28 feet, which surpassed that of Hurricane Camille in August 1969, which was 24 feet, 4 inches. Camille, a Category Five storm at landfall over Pass Christian, Mississippi, was a much smaller storm.

As a matter of fact, the storm was misconstrued as a weaker storm based on the satellite imagery at that time. Interpreting satellite imagery at that time was in its infancy, and forecasters didn’t really know how truly potent Camille was until a Hurricane Hunter aircraft flew into it. The Labor Day Hurricane of 1935 and Hurricane Andrew (August 1992) were also very small, but potent Category Five Hurricanes. Going back to the large storms, Hurricane Gilbert, another vast storm, was forecast to produce a storm surge of about 25 feet when it came ashore in the Yucatan with its 888 millibar pressure and 180 mile per hour winds in September 1988. Right now, Irma is capable of producing a storm surge of at least 20 feet in the Caribbean.

Looking at the latest forecast track by the National Hurricane Center in Miami, has Hurricane Irma is expected to continue on its general westward track through the Southeastern Bahamas and the Turks and Caicos Islands, be in the Southern Bahamas by Friday afternoon, and then hug the Northern Cuban coast on Saturday morning and afternoon before turning northward into the Florida Straits, and into the Florida Keys and South Florida by Sunday afternoon.

Right now, a Storm Surge Watch is in effect for Jupiter Inlet southward around the Florida Peninsula to Bonita Beach and the Florida Keys. A Hurricane Warning is in effect for the Dominican Republic from Cabo Frances Viejo to the northern border with Haiti. In Haiti from the northern border with the Dominican Republic to LeMole St. Nicholas. Southeastern Bahamas and the Turks and Caicos Islands. Cuban provinces of Camaguey, Ciego de Avila, Sancti Spiritus, and Villa Clara, Central Bahamas, and Northwestern Bahamas.

Meanwhile, a Hurricane Watch is in effect for Jupiter Inlet southward around the Florida Peninsula to Bonita Beach, Florida Keys, Lake Okeechobee, Florida Bay, Cuban provinces of Guantanamo, Holguin, Las Tunas, and Matanzas. A Tropical Storm Warning is in effect for Haiti from south o Le Mole St. Nicholas to Port-au-Prince. Cuban provinces of Guantanamo, Holguin, and Las Tunas. Other portions in Cuba and Florida should monitor the progress of this dangerous storm.

Taking a look at the models courtesy of Tropical Tidbits, the GFS has Irma hugging the northern Cuban coast for the next 48 hours. By early morning Sunday, the monster storm will begin to come ashore in the Florida Keys and the Southern tip of Florida as a 901 millibar low. By mid-afternoon Sunday, the hurricane is pushing through South Florida as a 919 millibar low. The Euro also has Irma hugging the Northern Cuba coast for the next 48 hours, and then moving over Southwestern Florida and the Florida Keys by 72 hours. Irma is also expected to be in Northern Florida as a 967 millibar low by the end of four days.

The CMC, or Canadian model has the storm in the same general area, but a little bit more in the Florida Straits by 48 hours. By late Saturday night, Irma has about to make landfall in South Florida and the northern and eastern Keys. The storm then comes onshore along the Southern tip of Florida and the Northern Keys early Sunday morning as a 971 millibar low. By mid-Sunday morning, Hurricane Irma will be sitting right on top of Miami, Florida. The storm then skirts the East Florida coast for 24 hours until it moves backs out over water near Jacksonville, Florida early Monday morning. The EPS or one of the ensemble models has a similar look to the GFS.

With the EPS, the storm is just northeast of Havana, Cuba by Saturday morning. By Sunday morning, Irma comes ashore over the Florida Keys and South Florida, and moves north through the Sunshine State to be near Jacksonville, Florida by the end of four days. Finally, the hurricane weakens to a tropical depression or storm near Atlanta by the end of five days. The HWRF model has a similar solution to the CMC model except that after it skirts the East Florida Coast and gets back out over water, the storm comes ashore again near Savannah, Georgia within 90 hours.

Twenty-five years ago, Andrew, which was the costliest storm on record after plowing through Homestead and South Florida in August 1992 with $27 billion dollars, is now second behind Katrina. However, if Irma continues along at a strength bordering Category Four or Five with 150 to 160 miles per hour, it is already estimated to cause some $138 billion dollars in damage according to a leading insurance agency according to CNBC. Remember earlier this month when early damage estimates for Harvey were at $190 billion dollars according to Accu-Weather.

The airlines using some of the airports in South Florida have started to shut down operations. There have been long lines waiting for rental cars in South Florida. Up to one hour for an SUV rental even if you have a reservation. Long lines of traffic are on the road out of Miami Beach according to video footage from WeatherNation. About 90 percent of all the residents of the Florida Keys have already evacuated by taking the only way out of there on U.S. Route 1. There has been a great deal of stress and fear expressed on the internet and social media as well.

Residents along the East Coast of the United States up to the Outer Banks of North Carolina should pay close attention to the whereabouts of this storm over the next several days. People in Florida should be making preparations to protect their home, and to evacuate if necessary. Stay tuned to the National Hurricane Center, local radio, television, internet, and social media outlets for the latest updates and info on this very dangerous storm.