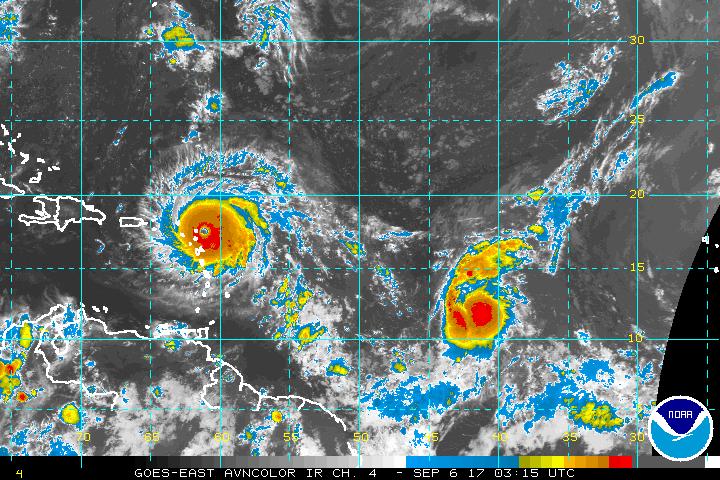 Infrared satellite imagery depicts Hurricane Irma, which is now a monster Category Five storm as it heads toward the Northern Leeward Island. Photo courtesy of NOAA.

Last night when I last posted to my blog, Hurricane Irma had intensified into a Category 4 Hurricane with 130 mile per hour winds. Pressure had fallen to 944 millibars. Irma didn’t stop there though. This morning when I headed out to work, I received a message via twitter from a good friend of mine that the pressure with Irma had fallen to 937 millibars, and it was still falling.

While at work, I didn’t get a chance to check the NHC web site for any updates on the storm. Then, when I got home at about 1:30 PM this afternoon, I learned that the hurricane had strengthened to a monster Category Five Hurricane with 180 mile per hour winds. By far Irma had become the strongest hurricane in the Atlantic in 2017. It could actually become the strongest hurricane in the Atlantic ever.

Back during the monster hurricane season of 2005, there were five storms that reached Category Five intensity (Dennis, Emily, Katrina, Rita, and Wilma). The last three of that wicked bunch surpassed each other for being the strongest hurricane ever recorded in the Atlantic. Wilma, the last major hurricane to make landfall in the United States before Hurricane Harvey came ashore near Rockport, Texas about two weeks ago, had a pressure of 882 millibars at one point.

Within a half an hour of getting home, the next advisory on Irma came out at 2:00 PM. The storm had intensified some more to have maximum sustained winds of 185 miles per hour, and a minimum central pressure of 926 millibars, or 27.34 inches. In addition, Puerto Rico, had joined Florida in declaring a state of emergency. Residents on the island, which is a United States territory, are very scared according to reports on CNN’s Anderson Cooper this evening. Florida has been already under a State of Emergency for over 24 hours, and special needs residents were being evacuated in South Florida.

The storm is already creating financial havoc. As Harvey did to the oil and gas industry in Texas, Irma is causing chaos in the United States Orange Juice market. With Florida’s large Orange crop under threat from Irma, Orange Juice futures were up according to Bloomberg Television. In addition, there were long lines in stores all across South Florida. Residents scrambled to buy such things as propane tanks and bottled water. One person reported that they actually had to buy a pack of bottled water for about $25.00.

The latest advisory, at 11:00 PM EDT, from the National Hurricane Center in Miami, Florida, indicates that Irma is still a Category Five Hurricane with 185 mile per hour winds, but the storm is even stronger with its minimum central pressure now down to 916 millibars, or approximately 27.05 inches of Hg. Wind gusts with this storm are in upwards of 195 knots, or nearly 225 miles per hour. The eye of this intense storm is just about 25 nautical miles wide. Hurricane Irma has grown in size as well. Last night, the storm was a little larger than Harvey. Since then, it has become even larger.

Hurricane force winds in Irma are now extending some 50 miles from the eye while Tropical storm force winds reach out some 175 miles. Irma is getting very close to the Northern Leeward Islands at this time. The menacing storm is about 50 miles to the East-Northeast of Antigua or roughly 50 miles to the East-Southeast of Barbuda. Irma is now moving to the West-Northwest at 15 miles per hour. Hurricane Warnings are in effect for Antigua, Barbuda, Anguilla, Montserrat, St. Kitts, Nevis, Saba, St. Eustatius, Sint Maarten, Saint Martin, Saint Barthelemy, British Virgin Islands, United States Virgin Islands, Puerto Rico, Vieques, Culebra, Dominican Republic from Cabo England to the northern border of Haiti, and Guadeloupe.

A Hurricane Watch is in effect from the Northern of Haiti from the border with the Dominican Republic to Le Mole St. Nicholas, Turks and Caicos Islands, Southeastern Bahamas, Cuba from Matanza Province eastward to Guantanamo Province. Tropical Storm Warning is in effect for Dominica and the Dominican Republic from south of Engano westward to the Southern border of Haiti. A Tropical Storm Watch is in effect for Haiti from south of Le Mole St. Nicholas to Port-Au Prince. Interests in Cuba, Haiti, Dominican Republic, the Northern Bahamas, Florida, and the Florida Keys should closely monitor the progress of Hurricane Irma.

The storm has a classic structure. It has that typical buzz saw look to it with a well defined eye, solid banding, perfect symmetry, and healthy outflow. Hurricane Irma has been a Category Five Hurricane for about 12 hours now. Most hurricanes can only sustain Category Five intensity for about 30 hours at best. Some have managed to surpass that. Experts indicated that this storm could be as powerful at this stage in the Atlantic as Hurricane Allen was in August 1980. There will be likely fluctuations in intensity as the storm goes through eyewall replacement cycles, and continues to re-organize.

According to the latest forecast discussion from the NHC, Irma is expected to go through a gradual weakening phase as it pushes through the Northern Leeward Islands, the Virgin Islands, Puerto Rico, Dominican Republic, Haiti, and Cuba. Keep in mind that there are mountains ranging from 7,000 to 11,000 feet above sea level in Hispaniola (Dominican Republic and Haiti) and Cuba. Irma’s interaction with these rugged land features will probably take some of the starch out of the storm, and the intensity forecast has the hurricane weakening to a still quite powerful Category Four storm with 140 mile per hour winds by the end of five days on September 11th.

Right now, the NHC consensus track for Irma continues to have it on a more West-Northwest track, which puts it just to the north of the Virgin Islands, Puerto Rico, Dominican Republic, Haiti, and Cuba through Saturday evening, and then taking more of a turn toward the north like Hurricane Charley did in August 2004. The storm will be in the area of Key West by Sunday night. South and Central Florida as well as the Western end of Cuba are currently in the cone of uncertainty.