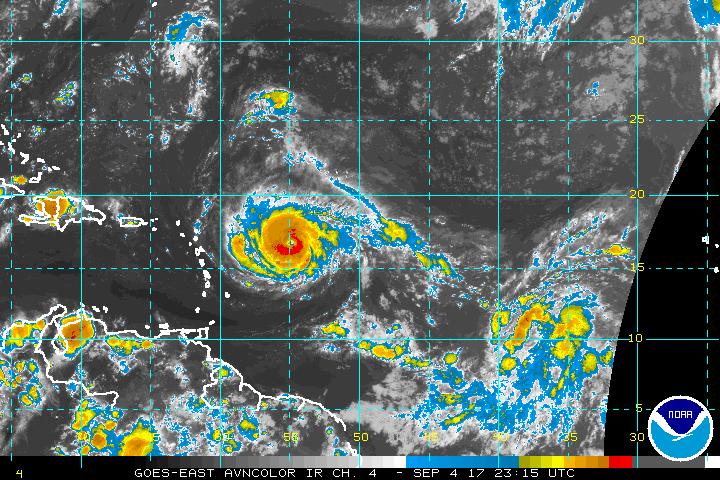 Infrared satellite imagery depicts Hurricane Irma, which intensified into a Category Four storm as it closed in on the Northern Leeward Islands early Monday evening. Photo courtesy of NOAA.

Earlier on Monday, Hurricaneville reported on the growing threat from Hurricane #Irma, which is now a few hundred miles to the east of the Leeward Islands. At the time of my last blog post, the winds with the storm were at 120 miles per hour, or a strong Category Three intensity on the Saffir-Simpson Scale. Late Monday afternoon, the ninth named storm of the 2017 Atlantic Hurricane Season strengthened even further.

As of the 5:00 PM EDT Advisory from the National Hurricane Center in Miami, Florida, Irma strengthened to have maximum sustained winds of 130 miles per hour with gusts as high as 160 miles per hour. Minimum central pressure remains at 944 millibars, or about 27.88 inches of Hg. Irma, which is pronounced ER-mah, is located approximately 490 miles east of the Leeward Islands, and now moving more to the west at 13 miles per hour.

Hurricane Irma, which is the fourth hurricane, and second major hurricane of the 2017 Atlantic Hurricane Season, is a little larger than Harvey was with hurricane force winds now extending some 40 miles from the eye while tropical storm force winds now reach out about 140 miles. The eye’s diameter is about 15 nautical miles, and is well defined. There remain numerous watches and warnings out for the Lesser Antilles.

The Sunshine State could see a possible landfall as early as this coming weekend according to an article posted this afternoon by CNN. Irma can still intensify even more. The NHC’s late afternoon forecast discussion indicates that Irma is expected to intensify to have 145 mile per hour winds within 12 hours, and reach its peak intensity of 150 miles per hour within 24 and 36 hours. By the time that the storm is in the area of South Florida, the Florida Keys, and Northern Cuba at the end of five days, Irma is expected to weaken, but remain a Category Four Hurricane with 130 mile per hour winds.

Taking a look at the most recent model runs from Tropical TIdbits, the GFS has Irma as a powerful 895 millibar low, or an equivalent to a powerful Category Five Hurricane in the Florida Straits between the Florida Keys, South Florida, and the Northern Coast of Cuba by the middle of Saturday afternoon. Fast forward 24 hours later, Irma is onshore in South Florida as a 920 millibar low. The storm will continue to advance northward, and be in Southern Georgia by next Monday afternoon, September 11th.

Meanwhile, the Euro has the storm a little further to the south and east, and over water off the Central Florida coast near Cape Canaveral as a 937 millibar low by the same time on Monday afternoon, September 11th. This is after the storm is forecast by the model to be situated just off the coast of Northern Cuba as a 946 millibar low by the mid-afternoon of Saturday, September 9th. The Canadian model has the storm further north and east than the Euro by the end of 7 days.

The HWRF model has the powerful storm with a 924 millibar low in the Florida Straits just to the north of the Northern Cuba coast late Saturday evening. So, over the next five days, the models are in general agreement that the storm will be in the area of the Northern Cuba coast on Saturday afternoon. Beyond that, the models vary with an array of solutions once you go six or seven days out. It all depends on if and when the trough advancing into the Eastern United States will pick up Irma.

For the residents of New Jersey, the Canadian model, CMC, does have an interesting solution for the end of eight days, or 192 hours. The model proposes that Irma will be in the vicinity of Chesapeake Bay as a 974 millibar low on Tuesday morning. I must emphasize though that the Euro and GFS have been more reliable models than the CMC although the GFS has been having a history of very low pressures with the storm’s intensity and track. It is also over a week out. In other words, a lot can change before that, and it is just something to keep in the back of your minds.

All residents in the Northern Leeward Islands, Puerto Rico including Culebra and Vieques, Hispaniola (Haiti and the Dominican Republic), Cuba, the Southern Bahamas, Florida Keys, and South Florida should continue to monitor the progress of the storm, and make the necessary preparations now. Residents further north along the Southeastern and Mid-Atlantic portion of the United States should also pay attention on the progress of this system, and be ready in case the storm’s forecast track makes more of a turn to the north.