Rains from Saturday Evening into Sunday Nearly Total an Inch 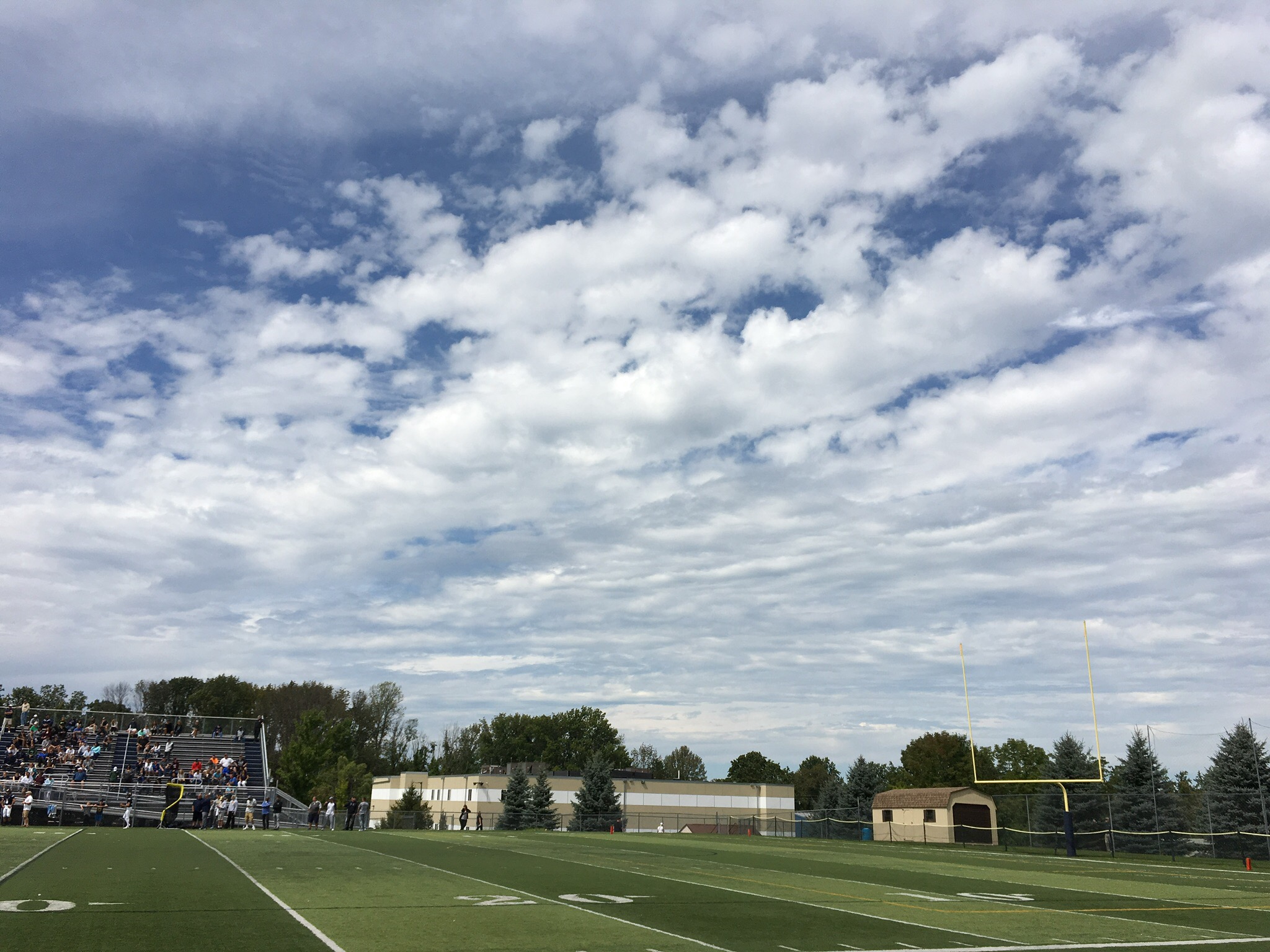 Clouds from Harvey’s remains move in on Sparta, New Jersey on Saturday afternoon

While Eastern Texas and Louisiana are still recovering from the devastation brought by Hurricane Harvey over the past week, the remains from that same storm moved east and brought its leftover rains to the Carolinas, and the Mid-Atlantic including New Jersey starting on Saturday evening, and lingered into Sunday of Labor Day Weekend.

Here at Greg’s Weather Center in South Plainfield, New Jersey, rainfall totals were about 0.79 inches. Rain started falling here at GWC and other areas of Central Jersey during the middle afternoon between 3:00 and 4:00 PM. I had personally taken a trip up to Sparta in Sussex County to take in a high school football game. Skies were actually sunny at the start of the game, but gradually grew more overcast.

The clouds began as cirrus and cirrocumulus clouds, and then altostratus clouds to give the sky, a more milky white color made more luminescent by the sun. The skies continued to grow more overcast in Sparta as the afternoon moves on. Sussex County, located in the Northwestern corner of New Jersey, was perhaps one of the last areas to receive the clouds and rainfall from Harvey’s remnants.

Temperatures were a bit cool and below normal for this time of year. The high at GWC in South Plainfield on Saturday was 66 degrees after a low of 57 earlier in the morning. They only went up a little bit more on Sunday. By late morning, the mercury had climbed to 63 at GWC, and then went up to 70 by the early afternoon. According to Accu-Weather and NJ.com, the overcast conditions and rain across the Garden State this weekend, kept temperatures down some 10 to 15 degrees below normal for this time of year.

Prior to arriving in New Jersey this weekend, Harvey’s remaining rains doused the Carolinas with anywhere between one to two inches thanks to thunderstorms. Harvey’s remains also created enough instability to produce rotating thunderstorms and some tornadoes. Of course, the damage paled in comparison to what the storm did in Texas from Friday evening, August 25 to Wednesday, August 30th. There, the storm made three separate landfalls across the Texas and the Louisiana region.

The first landfall brought devastating winds, storm surge, and rains. With winds of 130 miles per hour, Hurricane Harvey became the first major hurricane to make landfall in the United States in almost 12 years, and the first Category Four hurricane to impact the U.S. coastline since Hurricane Charley struck Punta Gorda, Florida in August 2004. Coming ashore near Rockport, Texas, the storm turned the town along the Middle Texas coast a war zone.

The storm would weaken into a tropical storm some 15 hours over land, and then dumped as much as almost 52 inches in the Houston area, making it the most rainfall from a tropical storm in the continental United States on record. Harvey’s rains are responsible for shutting down the nation’s largest oil refinery, and an explosion in a chemical plant. The last two Labor Day Weekend’s here in New Jersey have been impacted by a tropical system of some kind.

Last year, Tropical Storm Hermine approached the area and brought threatening skies to the Garden State early on in the weekend, but the threat eventually diminished, and the weekend turned out ok. This year, New Jersey got Harvey’s remains. This isn’t unusual either. The Atlantic is reaching its statistical peak in terms of tropical storm and hurricane activity. September 10th is actually the numerical peak of the season.

New Jersey has also seen its share of storms over the past 10 years. In early September 2008, heavy rains, and winds up to 60 miles per hour from Tropical Storm Hanna stirred things up across the state. Two years later, Hurricane Earl came close to the Jersey Shore, and created tremendous waves and dangerous surf at area beaches. Then, came 2011 and 2012 with Hurricane Irene and Superstorm Sandy. Irene’s sixth anniversary took place last weekend, and Sandy’s fifth anniversary will arrive at the end of October.

After there had been a lull in activity for a good portion of the summer, the 2017 Atlantic Hurricane Season has come back with a vengeance. First, there was Franklin, which went into the Mexican coast as a Category One Hurricane. Gert then followed by becoming the strongest storm to date through the middle of August as it strengthened to be a Category Two Hurricane on the Saffir-Simpson Scale even though it ended up not a threat to land. Harvey then became that one storm that could define the 2017 season with its rapid intensification in the Gulf of Mexico before crashing ashore as a Category Four storm.

Now, there is a new threat in the Atlantic. As Harvey departed from the scene, and after the nuisance that was Potential Tropical Cyclone Ten along the Carolinas moved out to sea, Irma emerged in the Eastern Atlantic, and has since become the season’s second major hurricane with 115 mile per hour winds. The storm, which is currently in the Central Atlantic, is expected to strengthen, and more importantly, be a possible threat to the Eastern Seaboard later this week, or early next week.